Antti Piila picked up the saxophone in his hometown Kemi when he was 10 years old. What started out in playing your average Top 40 hits lead to being exposed to funk and fusion, most notably Yellowjackets, Steely Dan and Chick Corea Elektric Band. After stints in the Conscript Band in Lahti and studies at the Pop-Jazz Conservatory in Helsinki, he relocated to Oulu only to have ska and big band music distract him from his electronic engineering studies. He also joined his army buddy Estola to play fusion tunes written by the Juntunen brothers, which ultimately lead to the founding of the group Nordic View. 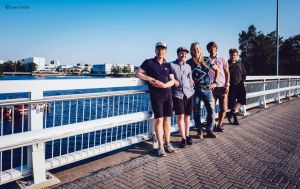 The Nordic View Band in Oulu